We recently spoke with Scott Ferris, Director of Tech Ops Hiring Programs at United Airlines, about their exciting new Calibrate apprenticeship programme which is aiming to open doors and break down barriers to encourage more people to pursue a career in engineering.

You recently launched the Calibrate apprenticeship programme at United Airlines - could you tell us a little bit about why this was launched, and what your main goals are in terms of bringing new talent into the company?

At the moment with our United Next plan, we're undertaking the largest growth an airline has ever done, in the shortest amount of time. We're purchasing 500 brand new narrow-body airplanes, and along with that, we'll need to hire 50,000 employees. And this is all happening in the next 5 years, with 2022 being the first of those 5 years.

We've already hired tens of thousands of new employees this year alone, and we've hired 1,000 AMTs so far this year; our goal moving forward is going to be to hire at least 1,200 technicians a year for the next 4 years, because the growth is happening so fast.

In 2023, we're going to be inducting a new airplane every 3 days for the entire year - so a big, big year! It's exciting, and we have to make sure we're ready on all fronts, across all departments.

With Calibrate, we want to give back to the community. We want to reach out to underserved communities, find bright kids who are out there, and give them a lucrative career pathway.

Our aim is to bring 1,000 technicians through the programme by 2026, and our goal is for at least 50% of those people to be people of colour and also women. Women in this industry are very underrepresented, only 2.6% of this sector are women. We want to showcase the talent that the women at United have, and show other women and girls that they can pursue this career. So that's what Calibrate is about!

It's a 36-month programme - we give the apprentices full pay and full benefits throughout the entire programme. And at the end of the 36 months, they'll come out of the programme with 24 months of union senority.

What does the application process involve, and who is able to apply?

After this, we'll then branch out to allow other employees within United to apply for the programme, and then to external applicants; which is then when it becomes a competitive application process. Anyone who applies will undergo an assessment (an aptitude test of 25 questions), and once they've passed that, there are a couple of rounds of interviews. Once they're selected, they will enter the programme onto an 8-week Boot Camp.

Once they're through the initial Boot Camp stage, they'll go into the OJT with an Apprentice Trainer. They'll be paired up with different Trainers as they move through the programme.

The final 6 months of the programme involves the preparation for their exams with the FAA.

You’re planning to launch to external applicants in 2023 - where can interested applicants keep up with news about when the applications open up?

We're planning to roll out the programme across multiple cities next year - stay tuned to our Calibrate website for more updates on this!

How often will you be taking on new cohorts moving forward, and how many new apprentices will you accept?

We're aiming to roll the programme out to all our stations in 2023, and we're hoping to add new cohorts every 6 months - dependent on our stations' capacity, as they will also be hiring new Mechanics on top of this programme, and the most important thing is keeping everyone operating safely.

We need new Trainers at the moment to help make this happen; a lot of our Senior Technicians want to become Trainers so that they can give back and teach the next generation of technicians, which is what this is all about.

What career opportunities exist within the company for those who have completed their apprenticeship with you?

Once a person completes the Calibrate programme and has passed their FAA exams, they automatically move from an Apprentice role straight into a Technician role, with no interview. They'll also accrue pay raises as they move through the programme, with full pay and benefits right from the start of their apprenticeship. So it's zero money out of pocket.

Basically, once a person enters the programme, they're guaranteed a spot with the company. We won't make them move away from their city, they'll be able to work in their home base; and once eligible for transfer to another base, they'll be able to do this if they choose to.

We're also searching for corporate sponsors to help run the programme, as there are a lot of large corporations out there who want to help with serving underserved communities and bringing more people into the industry from wider demographics.

What are some of the biggest benefits of undertaking an apprenticeship at United Airlines?

United is a destination career - it's a job that you'll be able to build a family around, ensuring that you have security and health benefits for the coming decades. It's really about providing a career pathway for people who may not otherwise have had the opportunity.

Our apprentices will get to work on the most state-of-the-art aircraft and equipment. We're a paperless airline, so the technicians all use tablets - in other words, they can go out to an airplane, troubleshoot an issue, read out what the data is telling them, pull up the manual right on their tablet, fix the issue from the plane and not have to go back and forth. It's pretty awesome!

In terms of perks, we have the largest international route structure of any airline in the world; we fly to over 60 countries every day, and it's growing. We're building new hangars internationally; there are endless opportunities.

The other thing about the A&P certificates, is that it's really your ticket to learn and grow. Using myself as an example, I started as a Technician, went and got my two certificates after leaving the military; and I've found 15 different roles at United over the years. If you want to stay working as a Technician, you can develop there; or if you want to move into Management, you can spread your wings and work in 1 of probably 20 different departments. Nobody is going to hold you back if you want to grow!

What general advice would you give to young and aspiring engineers who may be considering an apprenticeship?

Number one would be to keep your nose clean; in the US and around the world, these are safety-sensitive positions, which involve background checks. So any type of criminal history would mean you're not eligible.

The other thing would be to stay in school and work hard; you have to have a basic aptitude for math and reading comprehension. Those are the objective things.

In terms of soft skills, we want people who are creative, innovative, energetic, easy to work with, and who take initiative. Those are the things we look out for at interview.

Also keep up with as many organisations as you can; there are plenty of organisations where you can volunteer and get to know the aviation community. 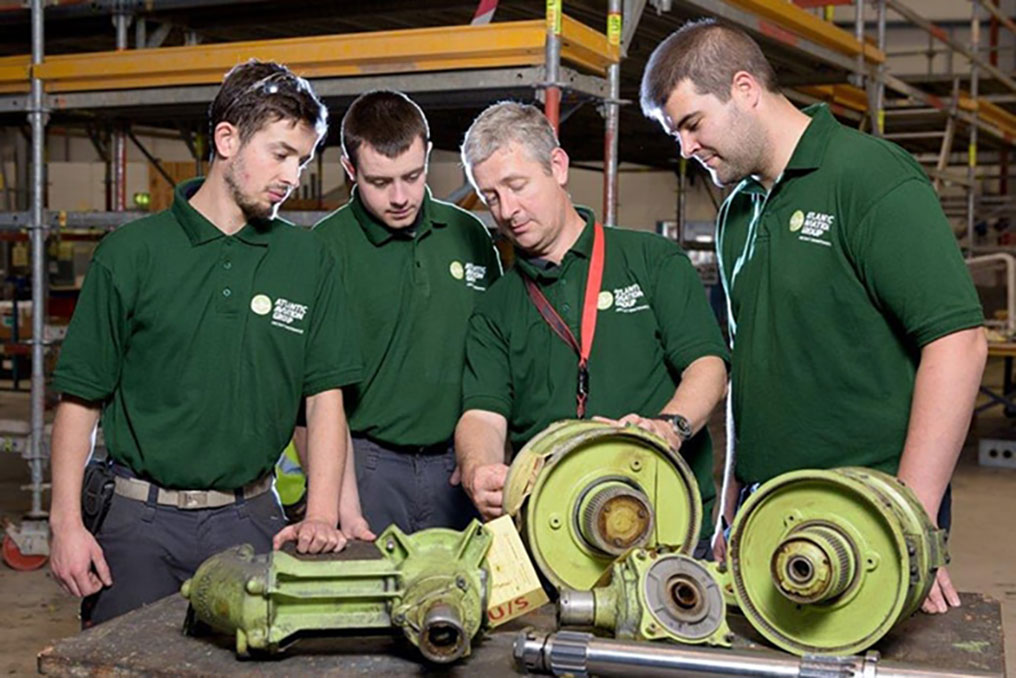 We recently spoke with Atlantic Aviation Group to find out more about the apprenticeship opportunities that they offer, and their advice for aspiring engineers...   Could you tell us a litt...

What does an aircraft engineering apprenticeship consist of?

Apprenticeships in aircraft engineering provide opportunities for students to combine their work with studies and receive a salary while continuing with the learning experience. The aspiring candidate...